The AR7 Air Force Survival Gun: For land, for air, for sea (VIDEO)

Looking for a takedown rifle that packs away to the size of a loaf of bread, weighs in at under 3-pounds, and still provides enough firepower for small game? Well, get in line with the rest of the world because it would appear that with the cult success of the Henry survival rifle and the Chiappa Little Badger, nowadays, everybody’s looking for a versatile rifle they can shove in a backpack. 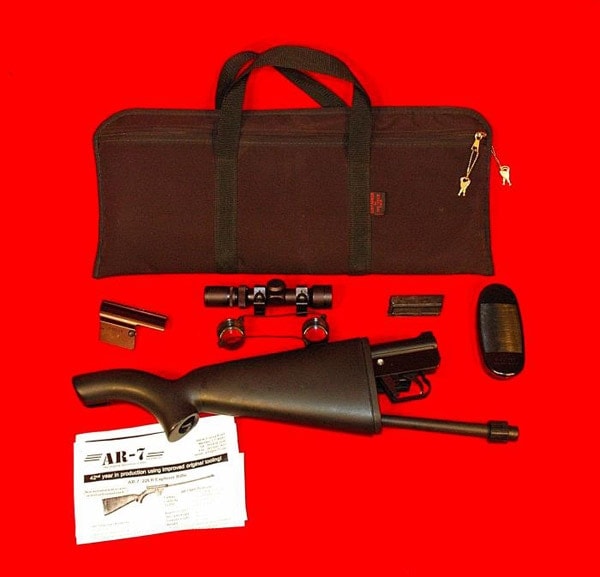 But with all the recent interest in prepper long guns, it’s important to remember that these rifles are not brand new designs by any stretch.  The AR7, the Air Forces’ favorite backpack .22, has been around for over fifty years, looks almost identical to the newest survival rifle offerings and, unsurprisingly, is still going strong.

As far back as the 1930s, the Air Force (then a part of the Army) saw the need for a small caliber survival rifle for aircrews lost in remote areas. Remember back then there was no such thing as GPS, satellite phones, or distress beacons and much less of the earth was adequately mapped. This translated into the fact that if your plane ditched somewhere off the beaten track, you could be on your own for weeks. To augment rations with small game and to keep the wolves (of all types) away, a small rifle was needed. This gun needed to be as small and light as possible so that it would not take up precious payload space when not in use and allow the airman to carry it for long distances without adding to their general fatigue.

In 1949, the Air Force adopted the M4 survival gun, a four-shot .22 Hornet caliber bolt-action rifle with a 14-inch barrel and collapsible buttstock made by H&R. This was supplemented by the foldable M6, which was a combo 22 Hornet/.410 double barrel. Even though thousands of these were on hand, in 1955 they wanted something new, smaller, and better—perhaps a testament to the limited capacity of these firearms. This is where Eugene Stoner and his then unknown ArmaLite company stepped in.

Stoner was a maverick of the firearms industry. His ArmaLite group was a division of Fairchild Aircraft and most of its early activity was directed to making firearms for the military. Though his name is now synonymous with the AR-15 family of rifles, the company’s first accepted design was the AR5/MA1 prototype survival rifle for the Air Force.

AR-5A M1A USAF survival rifle that the AR7 was based on. Check out the bolt action.

Like other Air Force firearms, this gun was designed around aluminum to save weight.  The only steel parts were assembly screws and a steel barrel sleeve and bolt head. To also keep down the ounces, there was no forearm and the stock was hollow plastic. Paired with the super low pressures of a 22 caliber round, the aluminum, and plastic construction wasn’t a deal breaker. 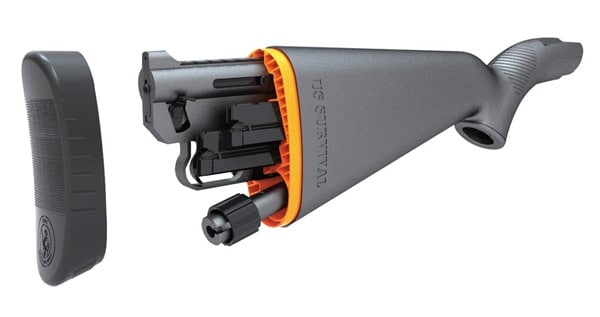 Henry US survival rifle, a clone/upgrade to the AR7. All components fit snug in the stock which also floats.

But the truly novel thing about the design was that the gun could be broken down into its sub-assemblies and stored in the hollow stock. Once the tight fitting butt pad was closed over the whole affair, the gun would float for long enough to be able to retrieve. The barrel was 14-inches long and a bolt action was used to cycle .22 Hornet rounds through a four round detachable magazine. The whole gun, when assembled was 31-inches long and weighed in at a super featherweight 44-ounces.

The Air Force bought 12 of the AR5/MA1 rifles for testing in 1956 and loved it, but not enough to replace their already purchased stocks of M4s and M6s. Stuck with the design and no buyers, Stoner redesigned it as a semi-automatic 22LR with a 16.1-inch (just legal enough to not be considered a NFA regulated Short Barreled Rifle) barrel. The standard magazine was a flush fitting 8-round detachable box mag, but longer capacity examples were available.  The stock even had internal space for two spare magazines (with a third stored in the receiver component).

The AR-7, well known for its almost magical take down abilities, made cameos in at least two different Bond movies as well as in the Get Smart television series in the 60s as a high-tech spy gun.  This kept its appeal alive and made it a decent enough seller for ArmaLite that it kept the company afloat. Looking back on it now, this was a really good thing; the original AR-7 was something of a jam-o-matic, not generally what one wants to fall back on in a survival rifle, that could have easily been swept into the dustbin of history and forgotten if not for it’s other impressive features.

AR7s made by AR industries used a skeleton stock and M16 style grip.

The AR-7, while super neato, had design flaws. You have to tighten the locking ring repeatedly while firing because it works its way loose every few rounds. In addition, since the feed ramp is part of the loosely fitting magazine, the gun inherently has issues failing to feed and therefore jamming. This is especially noticeable if the user inadvertently plays with the magazine with their off hand while steadying the rifle.

AR7 clones heave been washing up on US shores for the past 40-years.

This little 22LR kept the ArmaLite factory afloat for several years, and at one point was the only firearm they had in production. From 1959-73 ArmaLite made these little niche rifles, then sold the rights to Charter Arms, which sold it to Survival Arms Inc. in 1992 who finally passed the gun on to Henry Arms in 1998. Today the gun is still in production, with many small tweaks and improvements by Henry as the US Survival AR-7 for a MSRP of $280.

Henry US Survival rifle or an AR7 in camo.

Today, the Henry is one of the most searched and survival rifles in general are some of the most viewed guns on Guns.com. 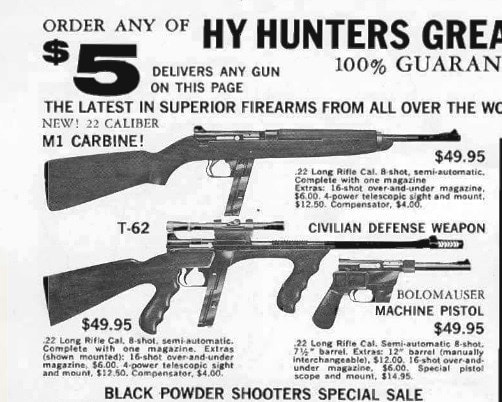 Hy Hunter ad from 1962 showing how the AR7 design could be modified to be an M1 carbine, Tommy Gun or a Broomhandle Mauser.

As you may have guessed, there were a number of clones of these guns, including a whole series by California mail order giant Hy Hunter in the 1960s. Hunter took the basic AR-7 receiver, magazine and barrel and made a clone of the M1 Carbine, the Thompson submachine gun (called the T-62), and the Broomhandle Mauser—your choice for only $49.95. In West Germany, they were made by JGL Preetz as the Automat 65 Rifle with a pot metal receiver and even worse quality control than the legendarily ‘lax’ standards of Hy Hunter. Besides Europe, these guns were made in South America with strange examples popping up in production in Argentina and Colombia.

For collectable Armalite made AR7s, look for the Armalite logo on the forward right hand of the receiver and the word “Explorer”.

Value wise, the old ArmaLite models are more collectable than shootable and tend to go for up to $300. The Charter Arms made guns, considered the kings of the failure to feed AR-7s, run a good deal less at the $200 range. Survival Arms made guns from the 1990s run closer to $150, and will often come with very distinctive silvertone or camo stocks.  Other, flakier, versions of the AR-7 and its clones are worth whatever someone is willing to pay for them.

While Henry has gotten a lot closer to working out all of the bugs then Stoner did, the gun is still not perfect. It faces stiff competition from both the Ruger 10/22 Takedown and the older Marlin Papoose.

The Ruger 10/22 Takedown, at an MSRP of $399, takes down to almost the exact same dimensions but has a much more reliable action (no feed ramps in the magazines!). On the downside, the 10/22 is downright chunky at 4.67-pounds—and does not float. 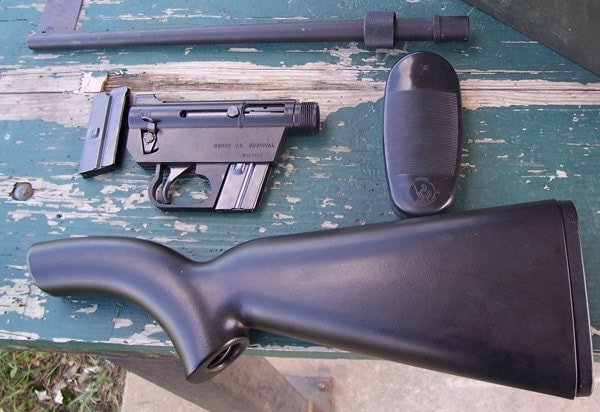 Henry made AR7, broken down to its basic components.

Still, if you want a classic takedown 22LR with a certain James Bond flare to it, the AR-7 may find a place in your gun safe. Or bathtub.