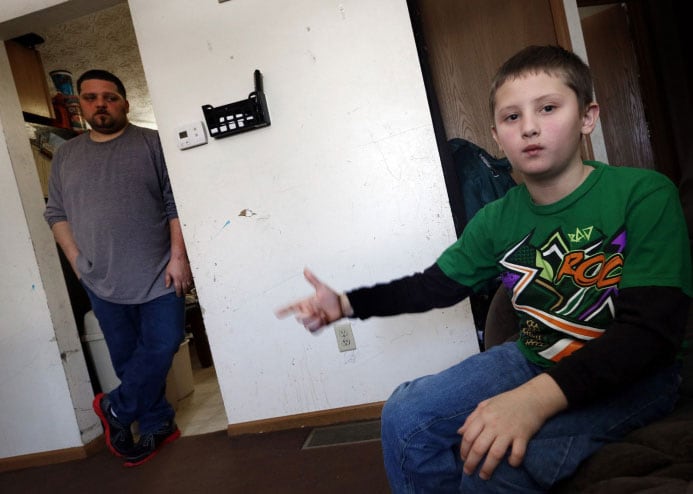 When asked what he thought of the three-day suspension over the finger gun incident, young Nathan replied, “I was thinking it was dumb.” (Photo credit: The Columbus Dispatch)

A 10-year-old boy from Columbus, Ohio, was suspended for three days following an incident last week which school officials described as the boy using a “level 2 lookalike firearm” pointed at another kid’s head “execution style.”

While district spokesman Jeff Warner said that this type of forbidden play has “been escalating,” the boy’s father, Paul Entingh, told The Columbus Dispatch that it’s the adults who are acting childish.

“I was just playing around,” Nathan Entingh told reporters. “People play around like this a lot at my school,” the fifth-grader added.

However, according to the Devonshire Alternative Elementary School Principal Patricia Price, students have received numerous warnings about this type of behavior and should know the rules by now.

Warner supported Price’s decision to suspend Nathan, who has never been in trouble before.

“The kids were told, ‘If you don’t stop doing this type of stuff, there would be consequences,’” Warner said, adding that the school had mentioned the no tolerance rule in three of the school’s newsletters, which were sent home with all of the students, not just Nathan.

Nonetheless, the boy’s father feels the punishment doesn’t really fit the crime, pointing out that nobody ever felt threatened by his son’s actions and, in fact, the boy Nathan was playing with never even saw the “level 2 lookalike firearm.” It was a teacher who noticed the finger gun and immediately separated Nathan from the other students to deal with his behavior, apparently telling him that she was so upset by his actions that she could neither look at him nor talk to him. 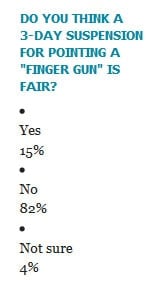 An informal poll conducted by The Columbus Dispatch showed that, at last count, 82% of readers felt the boy’s punishment was unfair.

“He said he was playing,” Entingh stated. “It would even make more sense maybe if he brought a plastic gun that looked like a real gun or something, but it was his finger.”

Entingh added that he would have even been fine with an in-school suspension or some other sort of less harsh punishment, but that three days suspension just seemed a bit excessive.

And while these types of incidents are occurring all over the country in recent months, Ohio seems to be particularly plagued by the schools’ “no-tolerance” policies, which stem all the way back to the years following the Columbine shooting.

However, one Columbus Democrat, State Sen. Charleta Tavares, has said enough already and introduced legislation last year to strike down a 1998 state law requiring schools to adopt zero-tolerance policies. Tavares wants schools to use common sense and reserve the no-tolerance policies for serious incidents only.

“A gun-shaped edible snack is not a weapon,” Tavares said when she introduced the bill, referring to the infamous case of the 8-year-old Maryland boy who was suspended last year after he chewed a Pop-Tart into a shape which resembled a gun.

“Many of us on both sides of the aisle want to find something that will give school administrators flexibility so they can be reasonable, remain safe and keep students in school,” she reiterated following last week’s incident.

Similar common sense legislation has recently been introduced in other states as well and Tavares said that at this point there continues to be hearings held on her proposed bill.