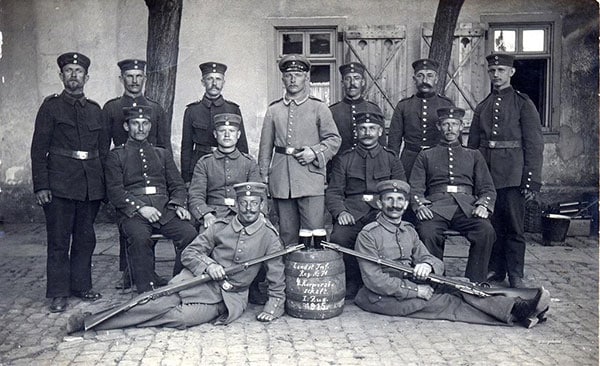 If you have ever picked up a bolt-action rifle made in the past century or so, odds are, at least a few of its features owe a hat tip to a gun that dates back to an age when men were men and mustaches were waxed. That’s right, we are talking about the Mauser M71, and it launched a gun-making empire.

In 1870, the most advanced rifles in the world were arguably the tubular-magazine repeaters of Mr. Winchester and Mr. Spencer, both residents of the United States. The lever action Spencer had accounted well for itself during the just-ended U.S. Civil War, while the Winchester carbines, also lever guns, were selling like hotcakes.

Dreyse Zundnadelgewehr M1841. Better known as the Dreyse Needle gun it would be replaced by the M71.

Meanwhile, Imperial Germany had just become its own unified country, defeating the French in the Franco-Prussian War. And during this conflict, the German Army had been saddled with their obsolete Dreyse zundnadelgewehr (needle-gun). 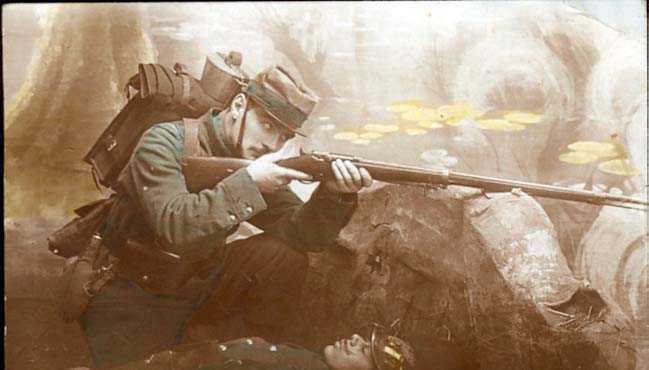 French Soldier with Chassepot 1866 rifle. These weapons were superior to the ones carried by the Germans of the day (though to no avail in the Franco-Prussian War).

This single-shot breech-loader was better than muzzle loading muskets, and could fire 4-5 rounds per minutes but its paper cartridges were easily damaged. The Germans learned harsh lessons from French infantry who were equipped with the more rapidly fired Chassepot rifle, which could easily double the firepower of the Teutonic hordes. Had the Germans not used superior tactics as well as enjoyed a good bit of martial luck, the war would have likely ended with a French victory.

French Chassepot rifle. The Mauser brothers incorporated this guns trigger design on the M71 from examples captured during war.

This left the newly minted German Kaiser crawfishing for better rifles, and a set of hungry brothers were ready. 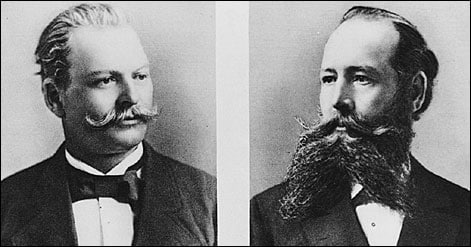 In the quiet town of Oberndorf in the 1870s were a father and six sons, all well known as some of the best gunsmiths for miles. This family, the Mausers, included brothers Paul and Wilhelm who aspired to something larger.

Experimenting with the early bolt-action of the Dreyse, the two brothers interested an American by the name of Samuel Norris, then a European sales rep for Remington, in a redesign of that gun’s bolt which included the ability to cock the rifle while it loaded and unloaded a round. You can thank Mauser for the fact that you don’t have to cock your bolt-action rifle each time you shoot it ever since. 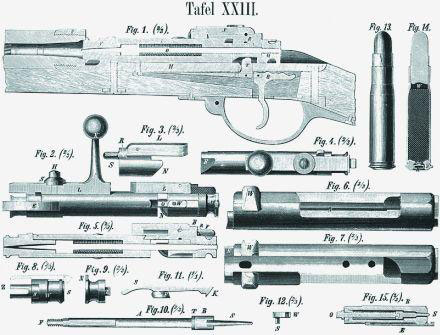 While Norris patented the new bolt in the U.S. (as the Norris-Mauser action!), Paul kept working on what to use it on.

The brothers Mauser took inspiration from the trigger mechanism of the French Chasspot, of which several had wound up in Germany after the recent war.  They added it to Paul’s bolt-design and kept working on it as a replacement for the Dreyse. 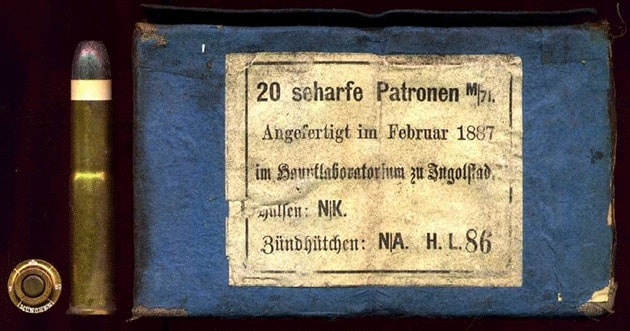 Identifying that the main problem with the needle-gun was its temperamental rounds, Mauser came up through trial and error with a fat 385-grain (yes, 385) 11.15mm bullet over a long 60mm rimmed brass case.  He filled it with the best 77-grains of black powder of the day. Since this round had a centerfire primer in its base, the bolt of the gun that would fire it could use a short firing pin rather than the characteristic Dreyse needle. This made the two-piece bolt shorter, faster, and easier to use. 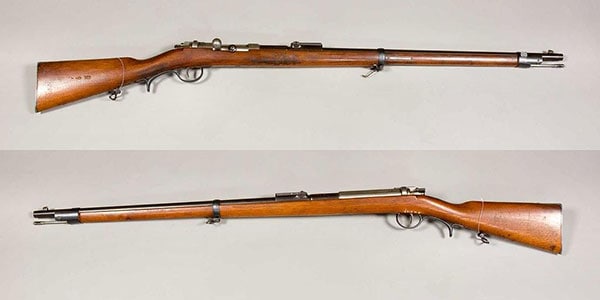 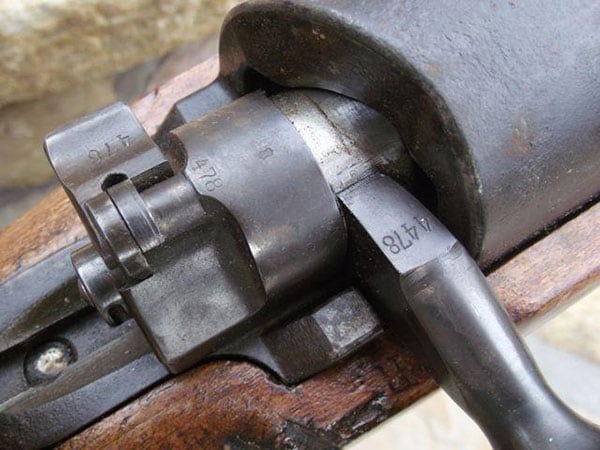 The flip wing safety seen here on a Mauser anti-tank gun was first introduced on the M71.

One aspect that was incorporated into this gun that had never been seen before was a spring-loaded flip-safety at the rear of the bolt that allowed a round to be loaded in the chamber with very little chance of an accidental discharge. This same active ‘wing’ safety is commonly found on many bolt-action rifles to this day.

The gun was simple, with an action that was made up of just 35 parts inside a forged steel receiver. When the components in the stock are counted, the entire rifle has only 45 parts. A heavy rifle, at just over 10-pounds, it was a whopping 52.75-inches long overall, largely due to its 32.75-inch barrel. 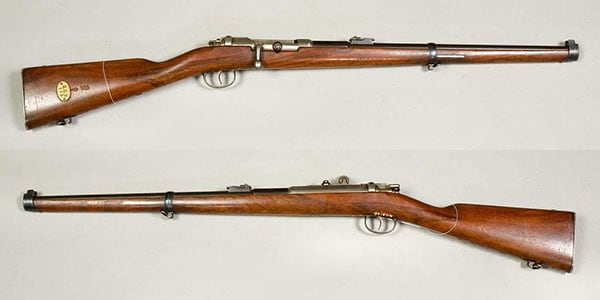 However, these dimensions were very close to the Dreyse, and, with the new gun’s faster operation, simplicity, and better accuracy and ballistics due to improved ammunition, the German military machine loved it. They adopted it in 1871 as the Infanterie-Gewehr 71 (Infantry Rifle 71). Soon orders for 100,000 guns were placed, which soon pushed over a million.

The updated M71/84 with bayonet. Note the introduction of an underbarrel magazine tube. 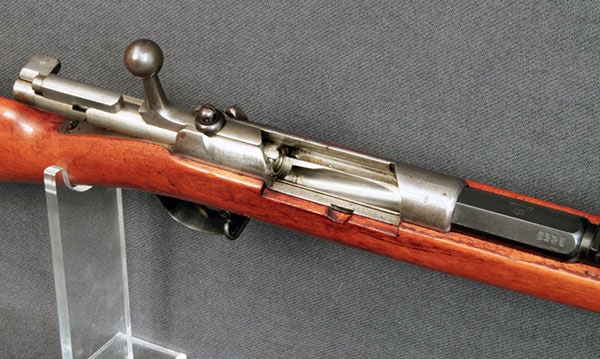 The M71/84 with bolt open. Note the screw washer that keeps the bolt from slipping from the rifle. 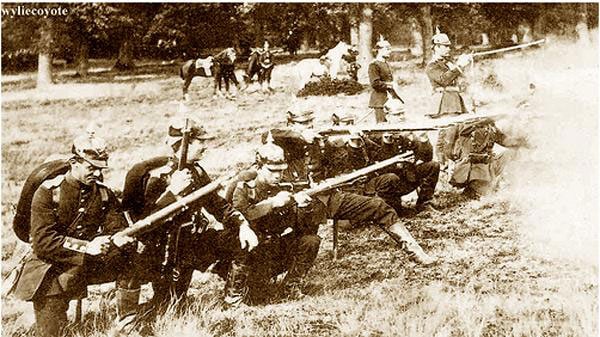 Mauser had to build an entire factory to put these guns into production and this new rifle would become the firearm that built an empire. Just forty years later, well over half the known world’s military carried a Mauser rifle (including the U.S. Army, whose M1903 Springfield was based on a Mauser design). 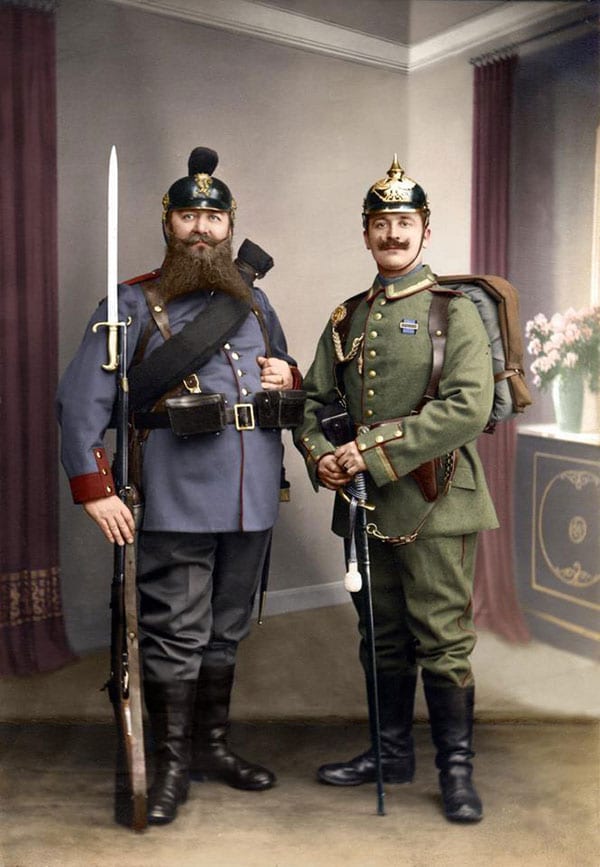 German soldiers, 1913. The Prussian reservist on the left has a M71 Mauser rifle. 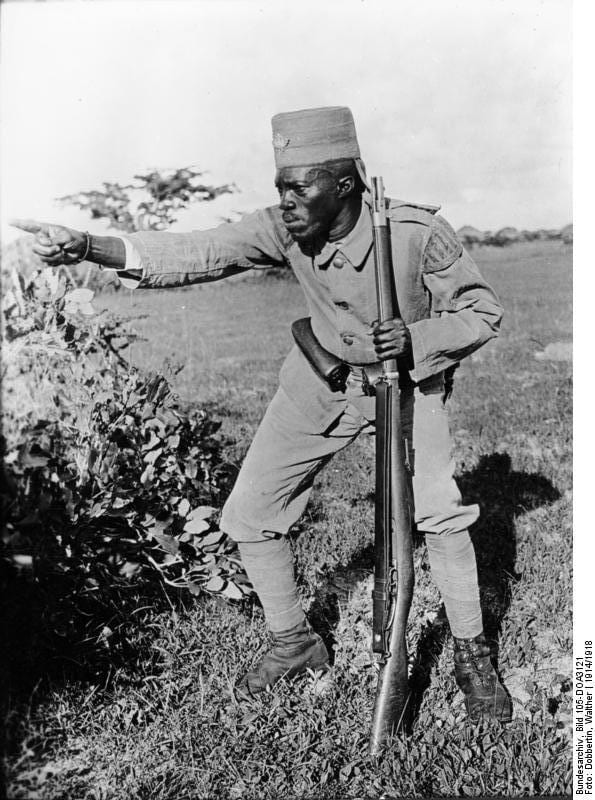 In 1884, the brothers updated the design to include an under barrel tubular magazine, like they had seen on the lever action guns. This magazine was inside the wooden stock of the rifle to protect it from damage and held a very nice supply of eight rounds due to its long length. The gun retained its basic design, but with the addition of a cartridge carrier to withdraw rounds from the mag and place them into the chamber. A magazine cut off, used to load the gun manually while keeping the tube full for emergencies, was also fitted to this improved model.

It was referred to as the M71/84 and, alongside to your typical single-shot British Martini-Henry, French Chassepot, or Russian Berdan, it was king of the battlefield, boasting 8-shot capacity, rapid reloading and long-range accuracy.  Although the Germans largely put these guns out to pasture when the later Mauser 88 and 98 series rifles replaced them, Model 71’s still served in rear-line uses during World War 1. They are seen in the hands of native Askari troops in Germany’s overseas African colonies as well as iron-cross outfitted Landstrum reservists. 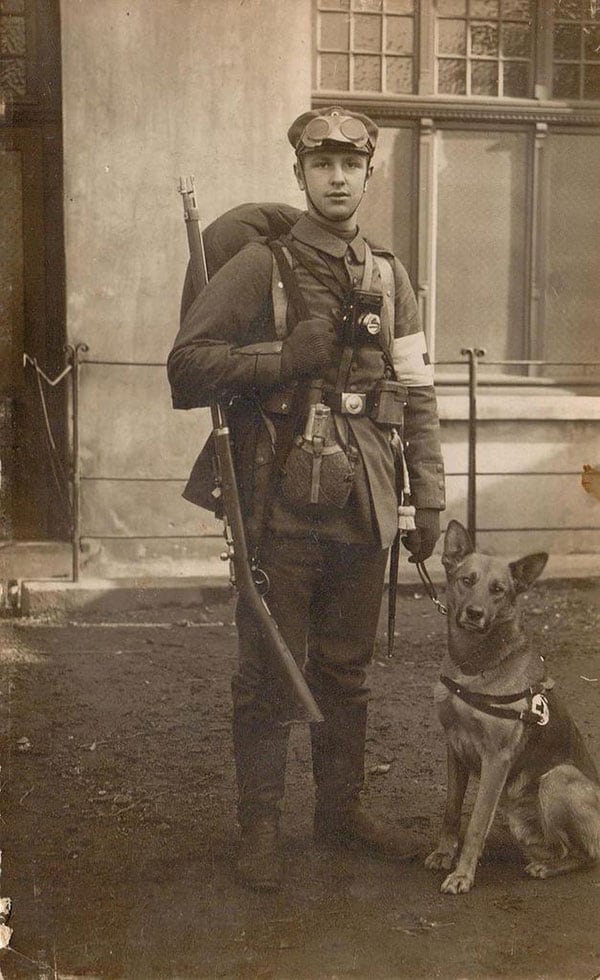 German reservist (Landsturm) with an M71 rifle in WWI. Note the early field lantern on his chest and “working” dog by his side.

Besides German army use, Mauser became an overseas hit with these guns, selling them to no less than a dozen countries in Asia and Latin America, being the first modern rifle used by the Imperial Japanese Army (and making an appearance in the Tom Cruise flick “The Last Samurai”). They also remained in use by China as late as the 1950s, with examples popping up later during the Vietnam conflict. 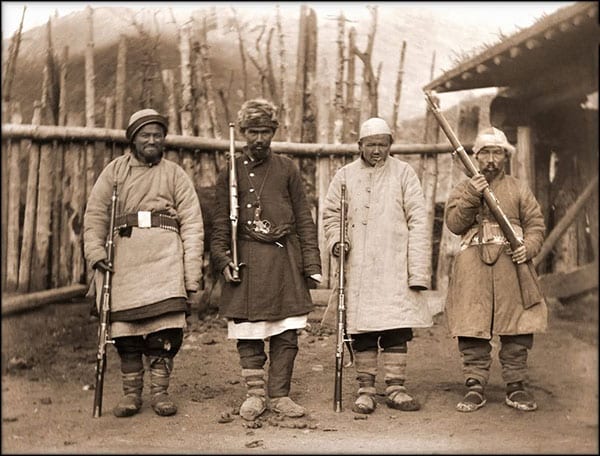 Abkomm-Lauf n/A small caliber training device. This 1876 made Mauser Jägerbüchse 71 rifle was modified to replace the “bushing disk” on large navy guns so that they could fire a variety of thrifty training rounds. It was painted with a black anti-rust paint. (Photo credit: Friends of the Royal Navy Museum)

The strangest versions of the M71 were rifles were converted by the German navy into Abkomm-Lauf n/A subcaliber training devices. As such, they were fitted inside large naval guns on cruisers and battleships so that the navy could practice gunnery drills on the cheap (after all 8mm Mauser is far cheaper than 350mm shells). These downright elderly rifles served through WWII in this role. Once such rare example, captured by American Marines is currently in the collection of the U.S. Marine Corps Museum in Quantico. 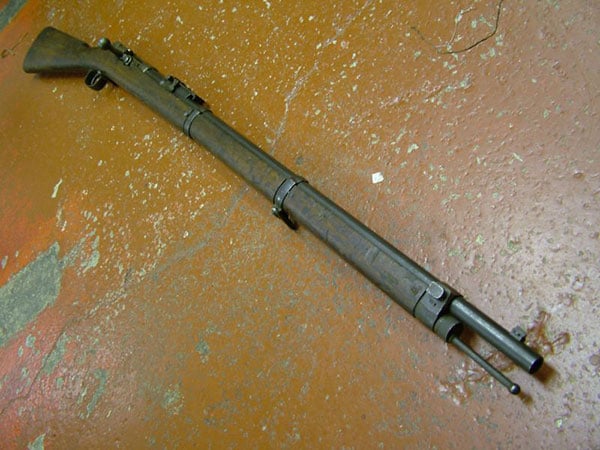 M71/84 rifle. Note the side mounted bayonet lug and the under-barrel tubular magazine just under the muzzle crown.  These are fairly easy to come by and sell somewhere in the $200-$500 range, depending on condition.

Speaking of captured, since these 19th century guns were simply too old to see front-line use in the World Wars of the 20th century, when found by victorious American soldiers they were often in great condition.

Because of this, a large and unknown quantity of M1871 Mausers found their way into the State, stuffed in returning GI duffle bags as war trophies. Passed down through the years, these handsome collector’s pieces were seldom shot (its hard to get 11x60R rounds over here), and are often still found in great condition today. 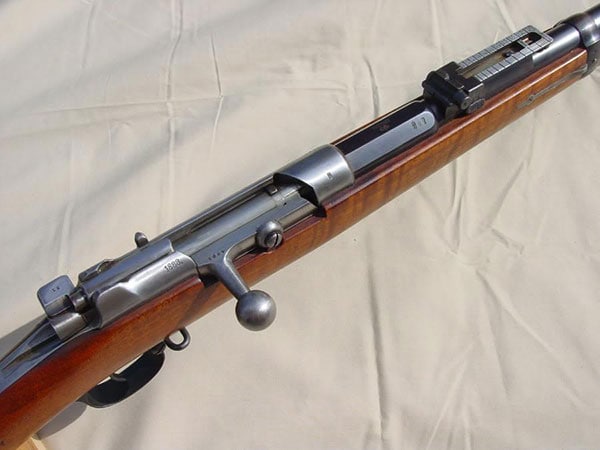 In the 1920s, with the Weimar-era Deutschemark virtually worthless, purchasing agents for Francis Bannerman of New York surplus fame roamed Germany and bought up old M71s and 71/84s by the wagonload for import as cheap deer rifles or budget military guns. On Page 53 of Bannerman’s 1927 catalog, they even advise these are ‘available in quantity direct from European ports complete with cartridges’ for non-U.S. sales.

Even more recently, importers like AIM and Gibbs have been selling guns that were used as period movie props. 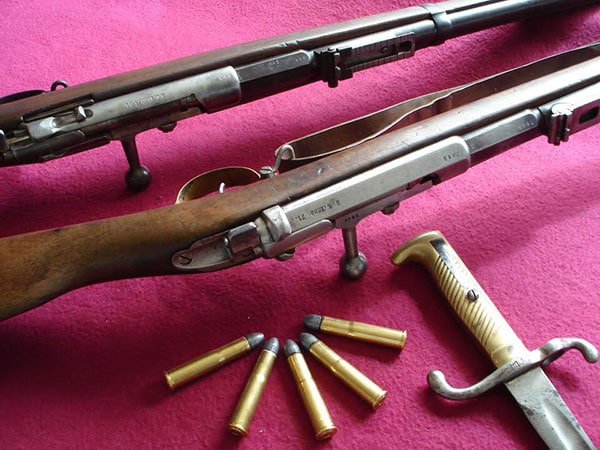 M71/84, top, M71, bottom. Note the differences between the bolt and the receiver. 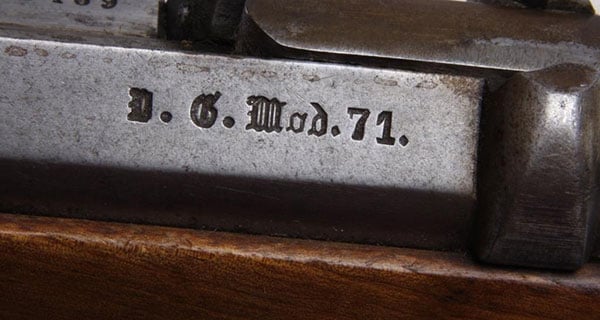 The Mauser 71 has distinctive Gothic script markings on its receiver.

With all these second-hand classic Mausers floating around the states, it is likely that more are in the land of the red white and blue than anywhere else in the world at this point.  Current prices run as much as collectors are willing to pay, and since many Mauser nerds covet either rare Latin American guns in exotic calibers or German martial 98-series weapons, there aren’t a lot of M71 fans out there.

However, they can normally be had in the $200-$500 range with single-shot M71s in matching condition being often more collectable. These exceptionally preserved guns fetch closer to $1500 for the right buyer. 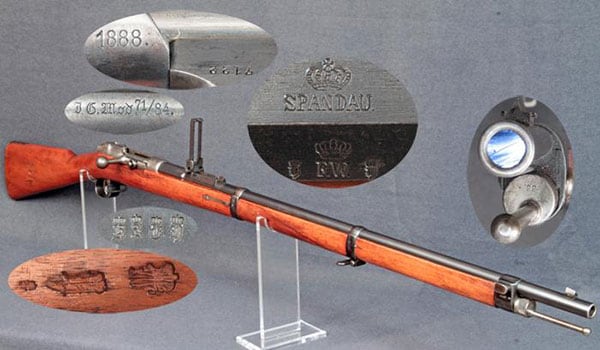 Keep in mind if you want to shoot yours that these guns were always designed for black-powder loads only. Remington loaded 11x60R (marked .43 Spanish, as Mausers brought into the U.S. captured in Cuba after the Spanish American war were known) back in the day for these imports. Nevertheless, no one has produced factory fresh ammo since the Kaiser died in exile. Buffalo Arms does make small batches of the rounds from time to time at about $75 a box.

That means if you really want to get some trigger time on your old Mauser you are reduced minting your own rounds and of course, we would be remiss if we did not tell you to follow all safety protocols and have the firearm in question checked out by a competent gunsmith familiar with the design before shooting it.  In addition, stock up the few spare parts there are still out there as the newest of these guns are well-over a century old.

Our final suggestion: hang it on the wall, and contemplate purchase of mustache wax for future family portraits.