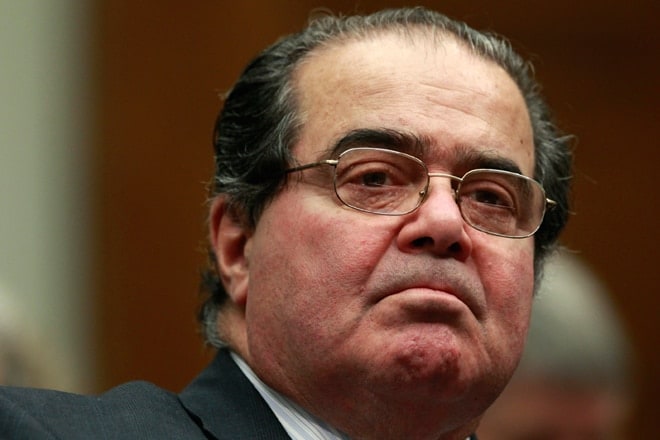 The unexpected death of U.S. Supreme Court Justice Antonin Scalia on Saturday ignited a firestorm of controversy over the prospect of filling his shoes. (Photo: Keven Lamarque/Reuters)

With funeral arrangements for the late Justice Antonin Scalia still pending, Republicans and Democrats have already drawn fierce battle lines in the effort to fill his spot in the Supreme Court.

The prospect of Obama leaving the Oval Office with fully one-third of the Supreme Court makeup decided on his watch– that last happened under President Reagan– has Republican leaders already vowing to throw roadblocks up to prevent.

“The American people should have a voice in the selection of their next Supreme Court Justice,” posted Senate Majority Leader Mitch McConnell, R-Ky., on Saturday. “Therefore, this vacancy should not be filled until we have a new President.”

It’s not just McConnell who is promising static with a nominee to the court this session.

U.S. Sen. Ted Cruz, R-Texas, currently hot on the campaign trail for the White House spot itself, told ABC’s George Stephanopoulos on This Week he would “absolutely” filibuster any Obama nominee.

“If the Democrats want to replace this nominee, they need to win the election,” said Cruz.

On the other side of the Senate aisle, Minority Leader Harry Reid, D-Nev., publicly urged the President to select a nominee right away, citing numerous important issues pending before the court, which is in the middle of its annual session.

“It would be unprecedented in recent history for the Supreme Court to go a year with a vacant seat,” said Reid. “Failing to fill this vacancy would be a shameful abdication of one of the Senate’s most essential Constitutional responsibilities.”

Reid, however, was incorrect in his statement in part as a seat was vacant for well over a year after Justice Abe Fortas resigned abruptly from the bench in May 1969 until Justice Harry A. Blackmun was confirmed and began his term in June 1970.

Nonetheless, Reid’s call for a rapid replacement is being met with a degree of public support. A MoveOn.org petition urging the Senate to act swiftly to fill the open seat garnered over 61,000 signatures over the weekend while the Democratic National Committee has sent out fundraising emails directing donors to their own petition site.

Second Amendment scholars warn the coming days may be pivotal for the court.

“This could be a watershed moment for the Supreme Court,” UCLA constitutional law Professor Adam Winkler told Guns.com Sunday. “The justices frequently decide the most controversial cases by a slim 5-4 margin. Scalia’s replacement could shift the balance on the Court. If, as seems likely, Republicans will delay any confirmation until after the election, the next president will certainly have one vacancy to fill and potentially more. Justice Ginsburg is 83 years old and is expected to retire before too long.”

Although the prospect of the White House appointing a temporary replacement for Scalia to the high court while the Senate is in recess — which it is until February 22 — is an option, and indeed at least one Justice, William J. Brennan, Jr. by President Eisenhower in 1956, came to the bench in such a method, court watchers downplayed the potential of this occurring. It should be noted though that Brennan was in the end confirmed by the Senate and went on to issue over 1,300 opinions before he stepped down in 1990.

This action by Eisenhower prompted a Democrat-led bill in 1960 to forbid recess appointments to the court or nominations in Presidential election years. That bill came within a few votes of passing.

“The bottom line is that, if President Obama is to successfully name a new Supreme Court Justice, he will have to run the gauntlet of the Republican-controlled Senate, and prevail there,” wrote Lyle Denniston for Scotusblog.com, pointing out the recess appointment scenario would in some cases be a violation of the Constitution. “The only real chance of that: if he picks a nominee so universally admired that it would be too embarrassing for the Senate not to respond.”