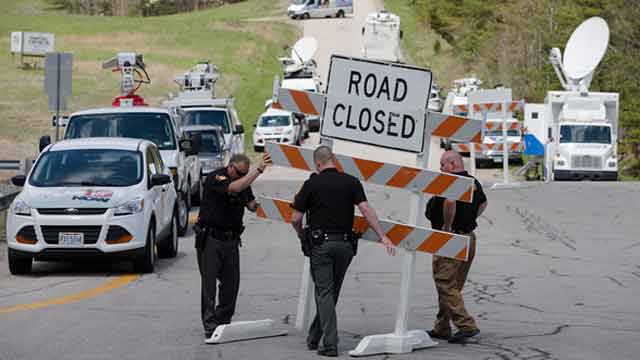 Local authorities said this is the largest case in the history of Pike County, which is otherwise filled with serene farm land. (Photo: John Minchillo / AP)

As authorities continue to investigate what’s been described as the execution-style killing of eight family members in rural Ohio, the Pike County sheriff is warning other members of the family to arm themselves.

The eight victims were found Friday at four separate properties, all within a couple miles of one another. Officials believe that not only were the four different crime scenes a part of the same crime spree, but that the victims were specifically targeted. The killings were “methodical and well-planned,” said Ohio Attorney General Mike DeWine.

“It was a sophisticated operation,” DeWine said. “And those who carried it out were trying to do everything they could do to hinder the investigation and their prosecution.”

Audio of 911 calls from the incident were released by DeWine’s office and they give insight into the gruesome scene.

The first call came in just before 8 a.m. The caller, who identified two of the victims as her brother-in-law and cousin, apparently goes to the home each morning to care for their dogs and chickens. The caller told the 911 dispatcher that she had a key to the house, which was locked when she arrived, and when she let herself in, she found there was “blood all over the house.” She also said two of the victims, who were lying on the floor, looked as if someone had “beat the crap out of them” before they were shot to death.

In the hours that followed, authorities discovered the remaining six victims, ranging in age from 16- to 44 years old. Three young children were found still alive, unharmed, at one of the crime scenes. One of the children, a 4-day-old baby, was lying in the bed next to its mother when she was shot and killed. All of the victims were apparently shot in the head.

Phil Fulton, paster at the Union Hill Church, where the victims previously attended, described the family as close-knit and hardworking, and said his congregation is not taking the news well. Pike County Sheriff Charles Reader said the family is well-known in the community and he has never had a problem with them in the past.

Information on a possible suspect or motive has not been released at this time. In fact, authorities indicate they currently have neither. Reader did confirm that marijuana growing operations were found at three of the four crime scene locations, but did not indicate if they believed it had anything to do with the murders.

As authorities continue what they warn will likely be a lengthy investigation, Reader did not hesitate to say the Rhoden family was specifically targeted. Furthermore, he clearly stated other members of the Rhoden family should stay armed for their own protection, as the suspect or suspects are still on the loose and should be considered armed and dangerous.