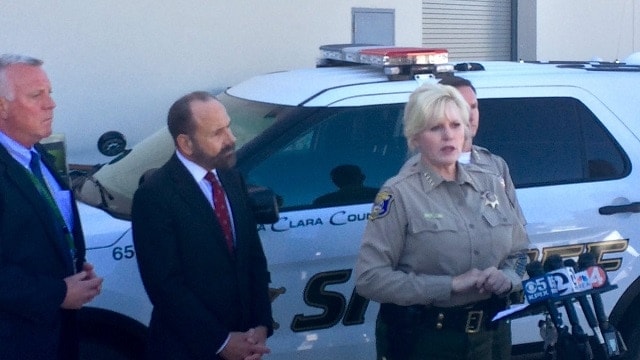 Santa Clara County Sheriff Laurie Smith on Thursday unveiled a series of lock boxes to be installed in personal and public vehicles to meet new safe-storage requirements for law enforcement.

Last week, Gov. Jerry Brown signed SB 869 into law, removing current protections that allow peace officers — including federal law enforcement officers, officers from other states in California on business and retired peace officers who are authorized to carry firearms — from regulations that require guns to be secured in vehicles when not in use.

To comply with the mandate set to take effect in January, Smith has ordered 750 gun vaults in two different types including keypad-operated safes for “take home” public vehicles and lock boxes with metal cables to affix them for deputies’ personal vehicles, The Mercury News reported.

The boxes cost between $50 and $75 and were paid for with private funds raised by the sheriff’s Advisory Board, a nonprofit organization. The agency is the first in the state to take the step to comply under threat of a $1,000 fine for each violation.

“We don’t want guns in the hands of people who shouldn’t have firearms,” said Smith at a news conference.

SB 869 was introduced by state Sen. Jerry Hill, D-San Mateo, following the deaths of Kathryn Steinle on San Francisco’s Pier 14 last July and muralist Antonio Ramos in Oakland — both killed with guns stolen from the cars of federal agents. In both cases, the victims’ families have filed lawsuits with the agencies involved, alleging the guns were left improperly stored.

“The high-profile nature of the muralist in Oakland and the Kate Steinle tragedy in San Francisco brought to light for all of us the devastating consequences of leaving a gun (unsecured),” Hill said. “It was a circumstance bound to go wrong given the amount of auto break-ins that happen.”

Law enforcement lobby groups including the California Association of Highway Patrolmen and California Police Chiefs Association, as well as gun control groups such as the Law Center to Prevent Gun Violence and the Brady Campaign, supported the bill in the legislative process.