How a good gun belt lightens the load in concealed carry 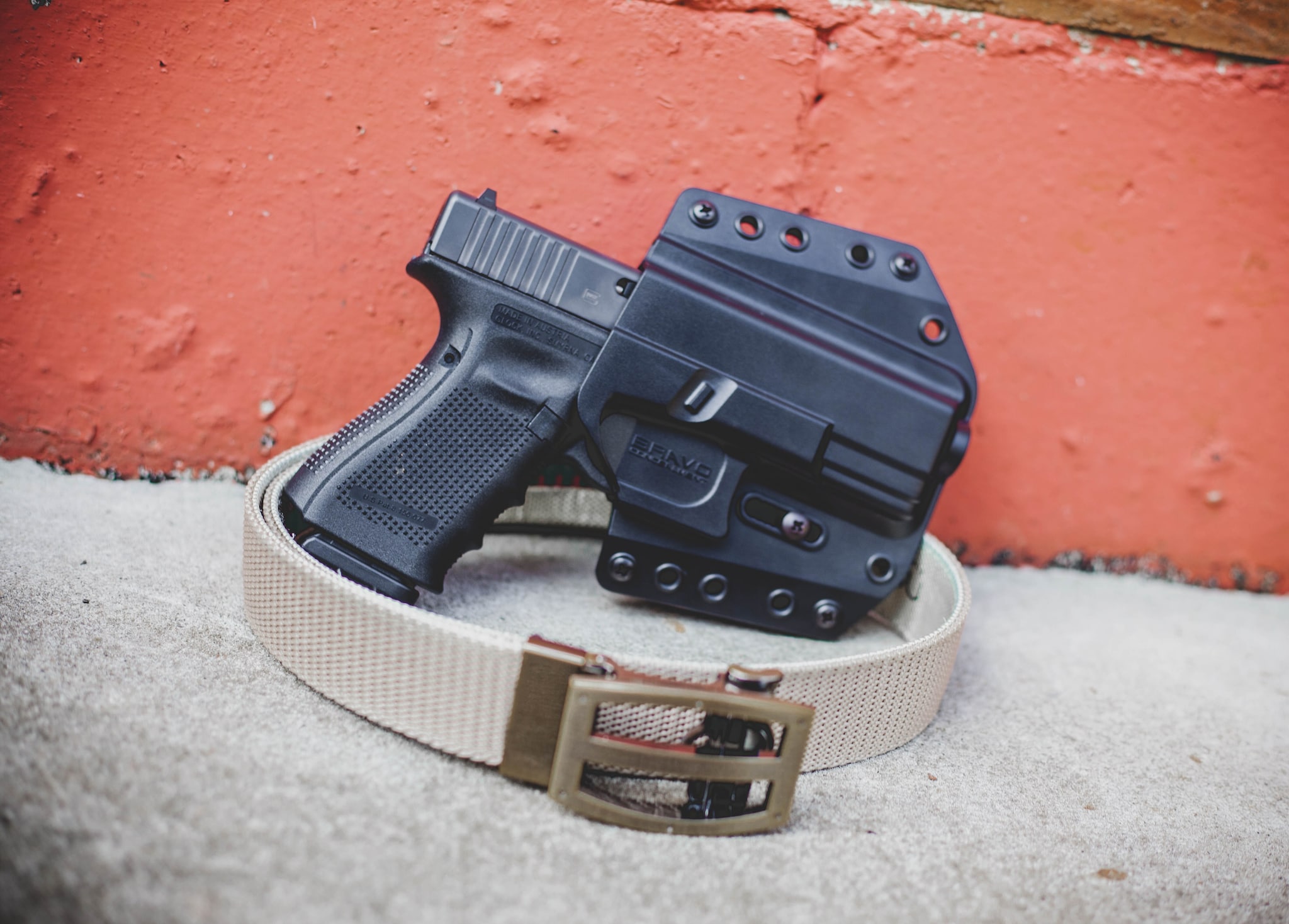 If you’ve been in the concealed carry game for any length of time, you’ve probably been privy to a few conversations relating to gun belts and whether they’re worth the expense. Typically priced upwards of $50, these belts are touted as a necessary piece of gear in your concealed carry arsenal; but are these any better than what you grab off the shelf at your nearest clothing retailer or is all this buzz around belts just babble?

What’s the fuss about gun belts?

Gun belts are purpose driven tools in the gun owners tool bag, offering a means to better hold and secure gun and gear when on the move. A quality gun belt will improve concealed carry in a variety of ways.

Concealed carry is an activity that actively relies on muscle memory, so it stands to reason that an essential component is relegating gear to the same, consistent location. To efficiently draw and reholster without having to take eyes off target, the gun owner needs to rely on the fact that his/her gun is in the same spot. A good gun belt will do just that. A gun belt will ensure that gear stays in place and doesn’t move around the waistline nor sag under the strain of a semi-automatic. 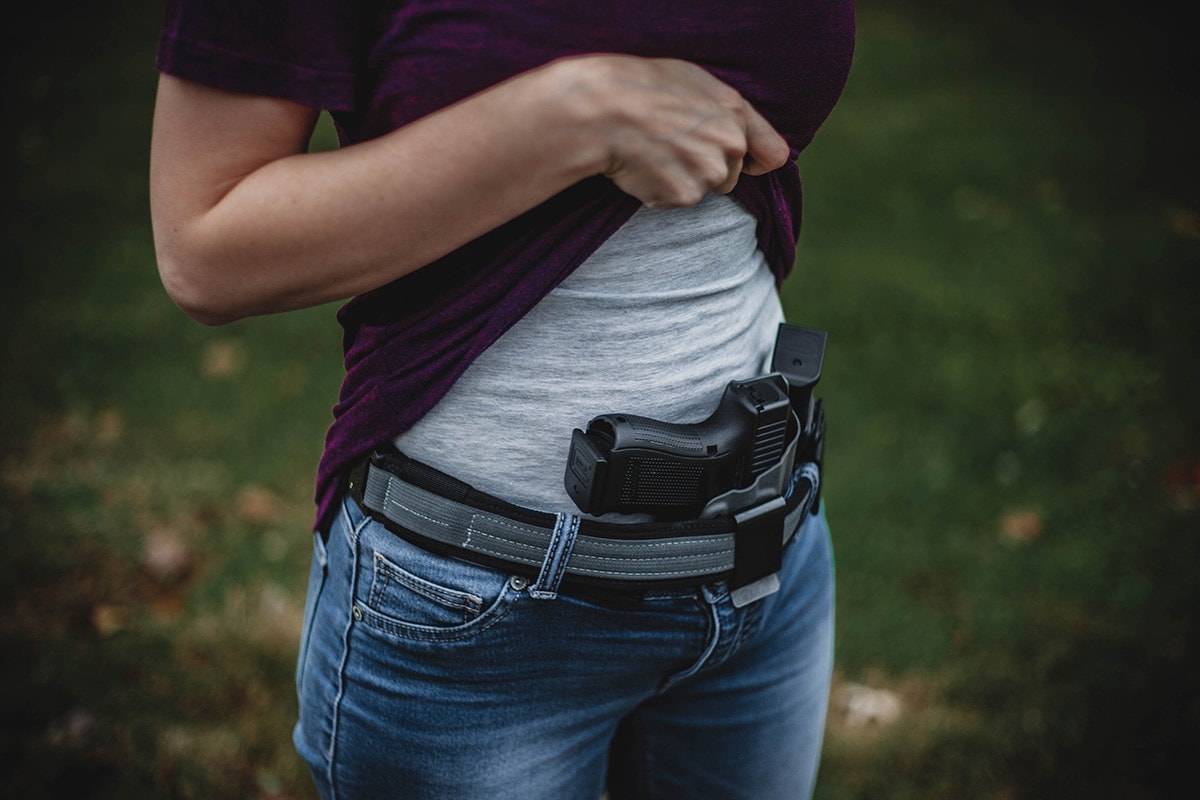 A good gun belt will draw gear towards the body and prevent sagging – both of which are necessary to prevent printing. (Photo: Jacki Billings/Guns.com) 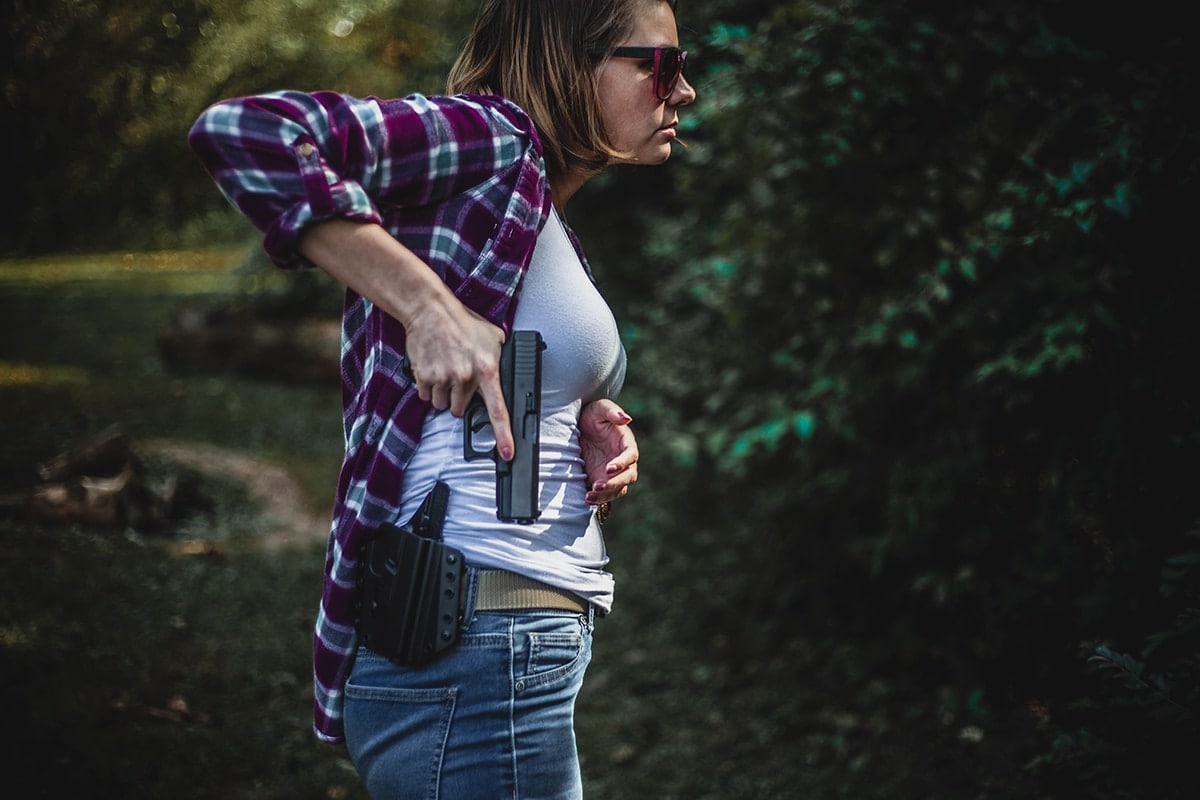 Gun belts aid in drawing, ensuring that all gear remains in place during the draw and when reholstering. (Photo: Jacki Billings/Guns.com)

While we’re on the topic of sagging, a good belt also prevents the weight of the gear pulling the pants downward or allowing the gun to sit lower than intended. Sagging gear can easily snag shirt tails and jackets when drawing, preventing users from drawing effectively. Floppy holsters also make rehlolstering difficult and can cause safety issues as some wearers accidentally muzzle themselves when trying to redirect the mouth of the holster upward. In short, a solid belt secures everything where it needs to be and increases safety all around.

Aside from knowing where the gear is on the belt line, a belt will also prevent printing. Regardless of body shape or size, a belt draws the gun, holster and any other items inward towards the body. This helps the gear mold to the wearer better, achieving an improved concealed carry look. Ever wonder how your favorite gun personalities carry a double stack in a t-shirt? Well, the belt helps.

Gun belts come in two flavors – leather and nylon – and choosing between the two comes down to personal preference. Leather provides a sturdier platform with more rigidity in its build. Capable of holding heavy gear, it is the preferred belt of many law enforcement officers.

Quality leather is notoriously durable while also granting wearers a dressier, conspicuous approach to concealed carry. Pairing with jeans and even dress pants, leather brings with it a certain amount of class; however, it can be uncomfortable especially for female carriers. Hip bones can suffer the wrath of leather’s rigidity, rubbing sore spots and leaving bruises. 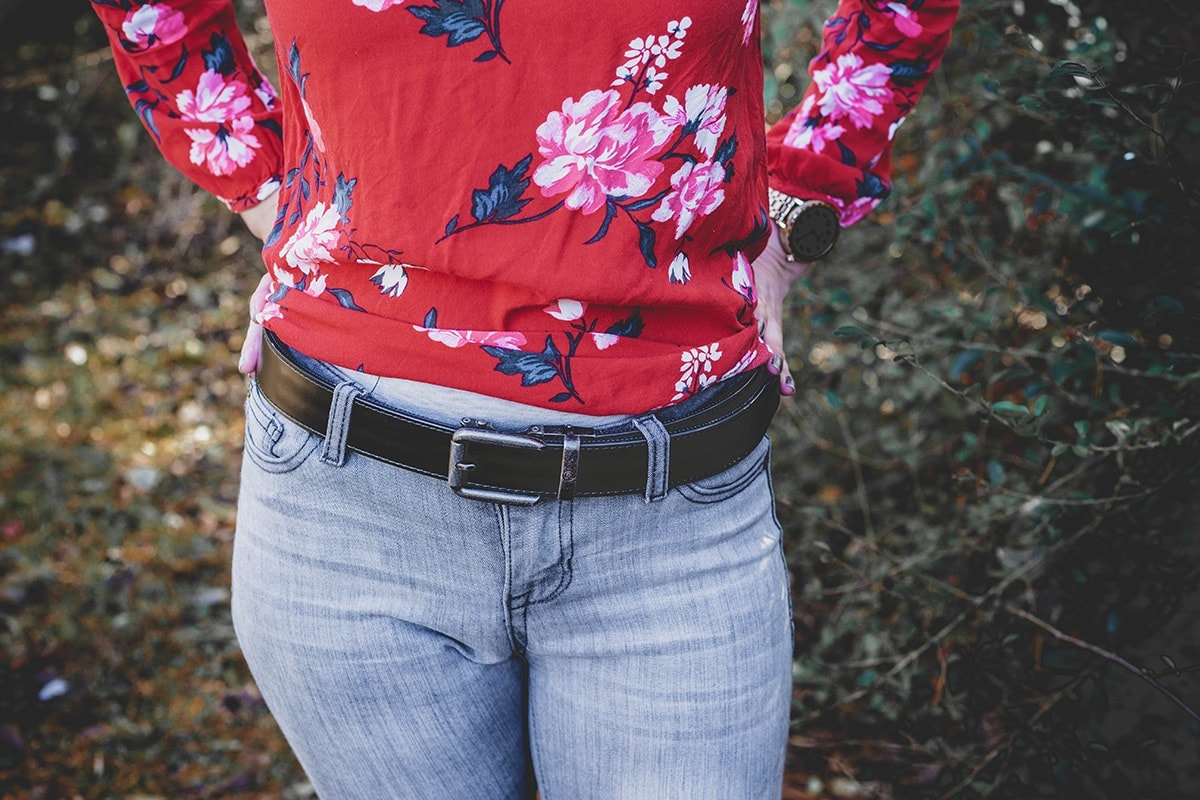 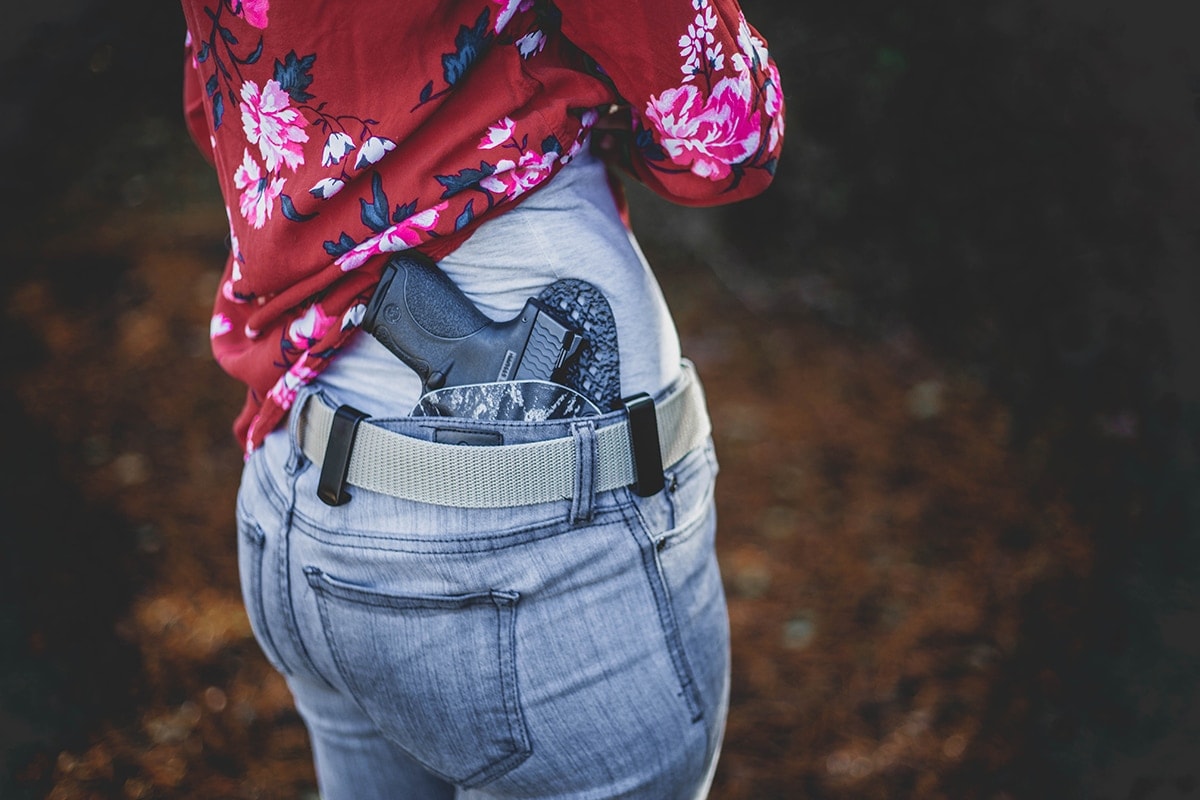 Nylon, on the other hand, brings a more flexible style to the table that many women find most comfortable. Nylon belts still allow for adequate concealed carry; but, flex around the hips leaving no marks or hot spots.

Good for every day carry, these belts also tend to favor a low-profile design that works especially well for petite CC’ers. Word of caution, fraying does occur more easily with lower quality webbing. Not to mention, nylon features a distinctly tactical look that might not pair well with dressed up wardrobes.

Considerations when shopping for a gun belt

Perusing the world wide web and even the local gun store, gun owners will note a bevy of belt choices to choose. How does one decide what belt is the best bang for the buck? When shopping for a belt consider first what belt loop size is required. Nothing worse than buying a belt suited for 2-inch loops when all your duds are fitted with 1.5-inch belt loops.

Also ensure that all waist measurements are correct. It can be frightening to measure and see exactly where you fall in the inches category but knowing what size you are with the intended gear on will give you an idea of what size belt to shop for. 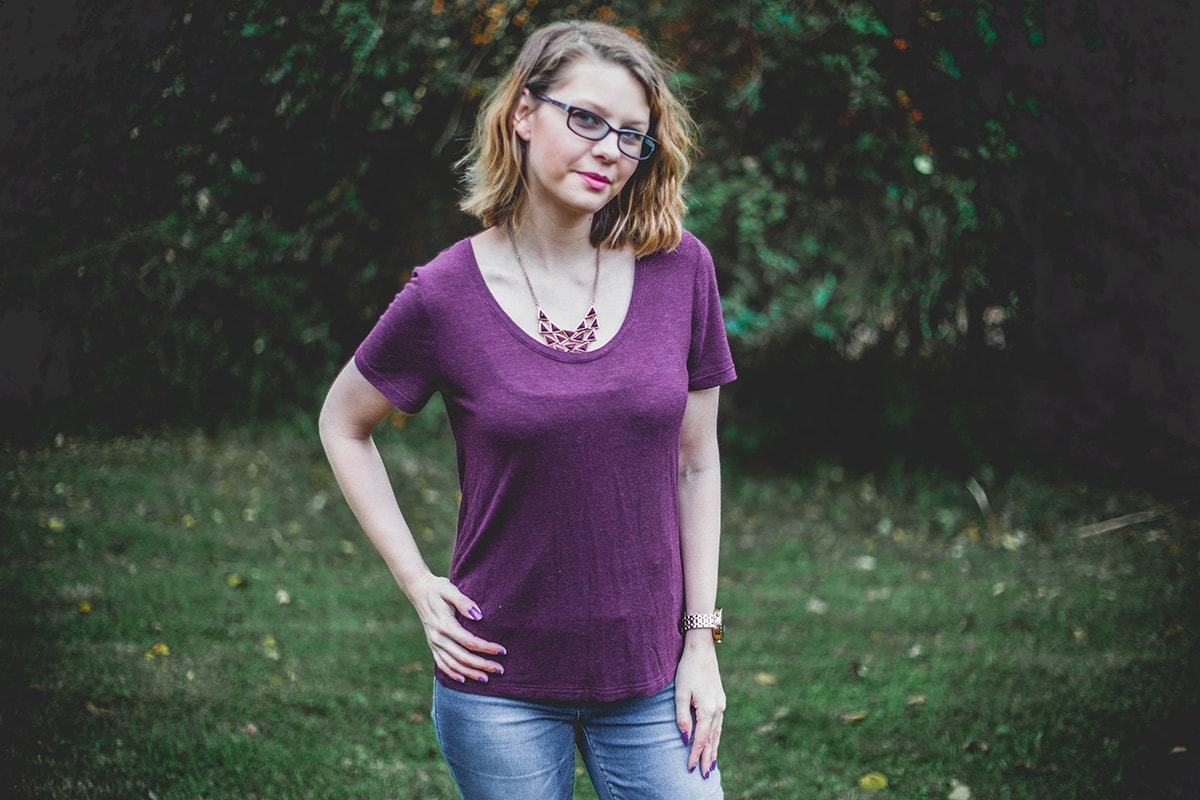 Evaluating belt rigidity and thickness is an added step that will help determine comfort. Some carriers are well suited for rugged, thick belts while others will find thickness negatively impacts carrying abilities. Take a harsh look at the current clothes in the closet and decipher whether a low-profile, thinner belt would do better given your fashion climate.

Finally, the most important aspect to evaluate is the belt strength itself. Though it’s tempting to dive into the bargain bin, remember that the belt is the lynch-pin in the concealed carry setup. If it fails, the whole system does; therefore, it’s imperative to find a belt that is sturdy and capable of supporting the weight the gear and gun will inevitably place on it.

While Walmart is an easy option when it comes to find apparel, it’s not the best option when shopping for concealed carry belts. Investing a little extra dough into a good, quality gun belt will alleviate some stress of carrying, elevate concealment and, overall, give wearers peace of mind.