The 3 Most Popular Shotgun Actions 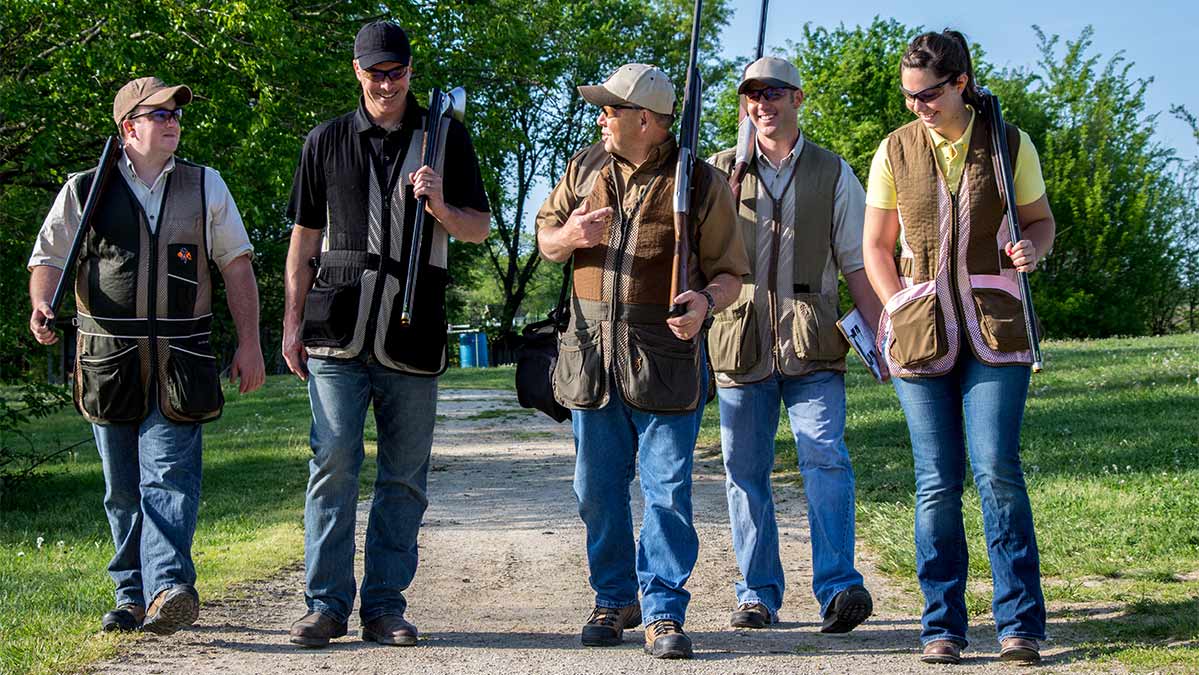 A group of average Joes about to partake in some trap shooting with their scatterguns. (Photo: NSSF)

Of the three types of firearms, shotguns are probably the most versatile. They’re easy to use and run the gamut in terms of practicality.

A firearm — rifle, pistol or shotgun — usually easily fills the role of self-defense or recreational gun, but a no-frills, plain Jane shotgun will meet the needs of both and a bunch in between. However, while the ammo and activities are often the same, different shotgun actions offer very different experiences.

The three types of shotgun actions we explore in this article are autoloading, pump and break action. However, there are honorable mentions with lever-action and bolt-action shotguns, but those designs are few and far between. In this article, we provide a general description of how the action works, but also commentary from some of the biggest shotgun makers in the country.

Like all semi-auto firearms, autoloading shotguns will automatically cycle the action after a round fires. With the pull of the trigger, the shotgun will fire a shot shell, extract and eject the spent casing, reset the action and then feed a new shell into the chamber. While this may sound cut and dry, an autoloading shotgun actually poses bigger challenges for designers than rifles or handguns.

When a firing pin strikes the primer on a casing, the tiny explosions builds up gas and pressure inside the chamber. That gas drives the projectile out of the barrel and it’s also used to cycle the action in semi-auto firearms. However, shotguns fire shells that contain multiple pellets instead of a solid projectile. That means propellent gases push against something more like a strainer than a plug, so shotgun makers have had to come up with creative solutions to control reciprocating energy.

In making the first successful autoloading shotgun, legendary gun designer John Browning used the energy from the gun’s recoil to cycle the action. He accomplished that by configuring the design so the barrel and bolt push back together. Then they moved forward separately so there’s enough room to insert and chamber another shell. Other designs have come along that use kinetic energy in other ways and then more traditional gas-powered operating systems exist as well.

The biggest improvement in the more than 100 years since the Browning Auto-5 released is how the gun is built, according to Browning Shooting Promotions Manager Scott Grange. He explained new models can fire a wide variety of loads without having to change out components. As for future improvements, those are a little unclear.

“There is only so much that can be done to a semi-automatic shotgun in the form of ‘change’ and most of that has already occurred. However, like any product, there will always be subtle enhancements that can be incorporated,” Grange said, adding that Browning and Winchester Repeating Arms have always done well adding new features to their designs.

Grange said he would recommend an autoloader for any use: hunting, recreational, competition, or home defense. While the obvious benefit is the action, Grange points out that semi-auto shotguns tend to have less felt recoil, especially with heavy hunting loads, and they can weigh and cost much less than an over/under break-action shotgun. The only downside is they can get really dirty. “If you are one who, for whatever reason, doesn’t like to maintain their firearms, an autoloader is probably not a good choice,” he said.

“Pump-action shotguns are extremely reliable, versatile and easy-to-operate,” explained Linda Powell, Mossberg director of marketing. “The simplicity of the design also provides for greater durability and pump-actions remain an affordable option for consumers.” She added that to date, more than 12 million Mossberg 500s have been sold.

Remington spokesman Eric Saurez agreed with the sentiment that their popularity is derived from their versatility. “The same pump action shotgun could be just as effective in the field putting food on the table, as it can be in the back of a police cruiser, military unit, or home defense role,” he said. “They are reliable, robust, and affordable and can serve nearly any need could ask in a very effective manner.”

Saurez explained that besides doubling the action bar (the component that connects the pump to the bolt), very little has changed with how pump-action functions. “By adding the second bar manufacturers were able to smooth out the operation of the gun and increase its reliability,” he said.

Powell pointed out that there have been vast improvements with features. “Shotguns now tend to be very specialized in their features, particularly in the hunting category,” she said and listed off features like camouflaged finishes, sighting systems, and choke tubes.

Yet, as manufacturing techniques and technology gets better, so will pump-actions. “It is hard to improve on a time-tested platform. Consumers can expect manufacturers to continue to tweak the slide-action with enhanced design features,” Powell said and pointed to Mossberg’s recently released magazine-fed pump-action shotgun.

Saurez explained other ways pumps will change include more personalized features. “The platform itself is excellent already, but adding in options for consumers to quickly and easily configure the gun to their preferences,” he said.

Break-action shotguns come in a few different flavors: single barrel, double barrel and on a few occasions triple barrel. The double is available with barrels side-by-side or stacked on top, or over-and-under. But break action gets the name because the barrel opens at the chamber where shells are loaded. It looks like it actually breaks open.

While break-actions can be used for just as many purposes as semi-autos and pumps, many limit them to bird hunting and trap shooting. Think of the aristocrat in a tweed jacket with a trained Springer Spaniel sniffing out pheasant on the grounds at Downton Abbey. However, break-actions users don’t always have to be so highbrow.

“The main reason why a lot of people use over/under shotguns is because of the reduced recoil they provide compared to other types of shotguns,” he said. “When using for sport shooting, this helps round count exhaustion.”

Check out the great selection of shotguns available inside the Guns.com Vault and collection of Certified Used Guns.